The first session of the Supreme Court was set to convene on February 1, 1790 in the Royal Exchange Building in New York City. Because three justices were unable to make it to New York in time, the first meeting was delayed until February 2.

The first meetings of the Court included four of the six justices – John Jay, James Wilson, William Cushing, and John Blair, Jr. John Rutledge, who was in New York decided not to attend the session, and Robert Harrison was to ill to travel and ultimately resigned from the Court.

The first meeting included four of the six original justices: John Rutledge was in New York, but decided not to attend the session, while Robert Harrison was too ill to travel to the session, and he had indicated he would resign from the Court. (President Washington confirmed Harrison’s resignation about a week later.). 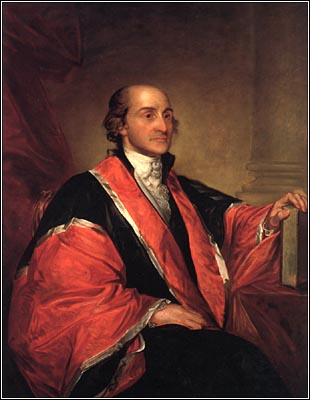 JOHN JAY was born on December 12, 1745, in New York, New York, and grew up in Rye, New York. He was graduated from King’s College (Now Columbia University) in 1764. He read law in a New York law firm and was admitted to the bar in 1768. Jay served as a delegate to both the First and Second Continental Congresses, and was elected President of the Continental Congress in 1778. He also served in the New York State militia. In 1779, Jay was sent on a diplomatic mission to Spain in an effort to gain recognition and economic assistance for the United States. In 1783, he helped to negotiate the Treaty of Paris, which marked the end of the Revolutionary War. Jay favored a stronger union and contributed five essays to The Federalist Papers in support of the new Constitution. President George Washington nominated Jay the first Chief Justice of the United States on September 24, 1789. The Senate confirmed the appointment on September 26, 1789. In April 1794, Jay negotiated a treaty with Great Britain, which became known as the Jay Treaty. After serving as Chief Justice for five years, Jay resigned from the Supreme Court on June 29, 1795, and became Governor of New York. He declined a second appointment as Chief Justice in 1800, and President John Adams then nominated John Marshall for the position. Jay died on May 17, 1829, at the age of eighty-three. 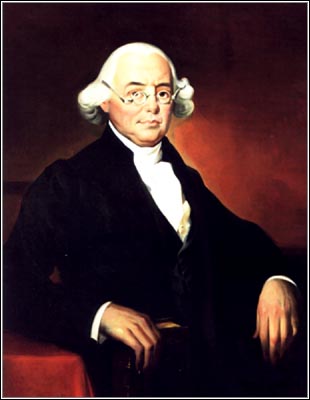 JAMES WILSON was born in Caskardy, Scotland, on September 14, 1742. He entered St. Andrews University in 1757 and emigrated to America in 1765 to take a teaching position at the College of Philadelphia. He read law with an attorney and in 1768 began a private law practice in Reading, Pennsylvania. Wilson was elected a delegate to the First Continental Congress in 1775 and was a signer of the Declaration of Independence. He also served as a delegate to the Second Continental Congress. As a delegate to the Constitutional Convention in Philadelphia in 1787, Wilson was a member of the committee that produced the first draft of the Constitution. He signed the finished document on September 17, 1787, and later served as a delegate to the Pennsylvania Ratification Convention. On September 24, 1789, President George Washington nominated Wilson one of the original Associate Justices of the Supreme Court of the United States. The Senate confirmed the appointment two days later. Wilson served on the Supreme Court for eight years and died on August 21, 1798, at the age of fifty-five.

WILLIAM CUSHING was born on March 1, 1732, in Scituate, Massachusetts. After graduation from Harvard College in 1751, Cushing taught school for one year in Roxbury, Massachusetts, and then read law in Boston. He was admitted to practice in 1755. In 1760, Cushing moved to Lincoln County, Massachusetts (Now Dresden, Maine), to become a Probate Judge and Justice of the Peace. In 1772, he was appointed to the Superior Court of Massachusetts Bay Province. Under the new State Government, Cushing was retained as a Justice of the Massachusetts Superior Court, and in 1777 he was elevated to Chief Justice. From 1780 to 1789, he served as Chief Justice of the Massachusetts Supreme Judicial Court. Cushing strongly supported ratification of the United States Constitution and served as Vice Chairman of the Massachusetts Ratification Convention. On September 24, 1789, President George Washington nominated Cushing one of the original Associate Justices of the Supreme Court of the United States. The Senate confirmed the appointment two days later. Cushing served on the Supreme Court for twenty years and died on September 13, 1810, at the age of seventy-eight.

JOHN BLAIR, JR., was born in Williamsburg, Virginia, in 1732. He was graduated from the College of William and Mary in 1754. After one year of law study in England at the Middle Temple, London, he returned to Virginia to practice law. Blair began his public service in 1766 as a member of the Virginia House of Burgesses. In 1770, he resigned from the House to become Clerk of the Governor’s Council. Blair was a delegate to the Virginia Convention of 1776, which drafted the State Constitution. Blair became a Judge of the Virginia General Court in 1777 and was elevated to Chief Judge in 1779. From 1780 to 1789, he served as a Judge of the First Virginia Court of Appeals. Blair was a delegate to the Federal Constitutional Convention of 1787 and was one of three Virginia delegates to sign the Constitution. He was also a delegate to the Virginia Ratification Convention of 1788. On September 24, 1789, President George Washington nominated Blair one of the original Associate Justices of the Supreme Court of the United States. The Senate confirmed the appointment two days later. Blair served five years on the Supreme Court. Citing the rigors of circuit riding and ill health, he resigned on January 27, 1796. Blair died on August 31, 1800, at the age of sixty-eight. 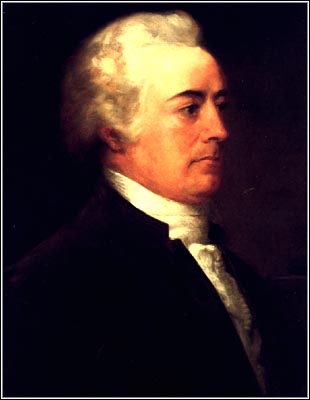 JOHN RUTLEDGE was born in Charleston, South Carolina, in September 1739. He studied law at the Inns of Court in England, and was admitted to the English bar in 1760. In 1761, Rutledge was elected to the South Carolina Commons House of Assembly. In 1764, he was appointed Attorney General of South Carolina by the King’s Governor and served for ten months. Rutledge served as the youngest delegate to the Stamp Act Congress of 1765, which petitioned King George III for repeal of the Act. Rutledge headed the South Carolina delegation to the Constitutional Convention in 1787 and served as a member of the South Carolina Ratification Convention the following year. On September 24, 1789, President George Washington nominated Rutledge one of the original Associate Justices of the Supreme Court of the United States. The Senate confirmed the appointment two days later. After one year on the Supreme Court, Rutledge resigned in 1791 to become Chief Justice of South Carolina’s highest court. On August 12, 1795, President George Washington nominated Rutledge Chief Justice of the United States. He served in that position as a recess appointee for four months, but the Senate refused to confirm him. Rutledge died on June 21, 1800, at the age of sixty.

ROBERT HARRISON was one of Washington’s aides-de-camp during the Revolutionary War and later became his military secretary. After serving as the chief justice for Maryland’s court system, Washington nominated Harrison to the Supreme Court. Sickness kept Harrison from accepting the position and he died in April 1790.