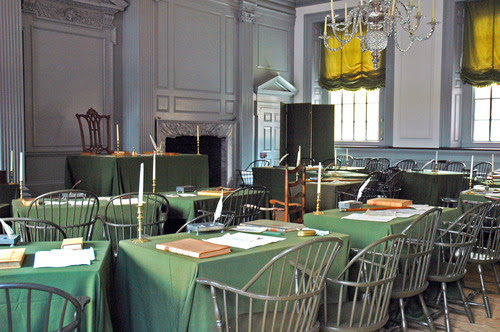 Today marks the 230th anniversary of the start of the Constitutional Convention in Philadelphia, Pennsylvania, on May 25, 1787.  Originally set to begin on May 14, a quorum was not achieved until May 25.

In a letter to Thomas Jefferson dated October 24, 1787, James Madison outlined what was achieved by the Constitutional Convention delegates between May 25 and September 17, 1787:

“[T]he great objects which presented themselves were 1. to unite a proper energy in the Executive and a proper stability in the Legislative departments, with the essential characters of Republican Government. 2. to draw a line of demarkation [sic] which would give to the General Government every power requisite for general purposes, and leave to the States every power which might be most beneficially administered by them. 3. to provide for the different interests of different parts of the Union. 4. to adjust the clashing pretensions of the large and small States. Each of these objects was pregnant with difficulties.

The whole of them together formed a task more difficult than can be well conceived by those who were not concerned in the execution of it. Adding to these considerations the natural diversity of human opinions on all new and complicated subjects, it is impossible to consider the degree of concord which ultimately prevailed as less than a miracle.”

Noah Webster would later perfectly describe why the Constitutional Convention has come to be called the “miracle at Philadelphia”:

“[T]he origin of the American Republic is distinguished by peculiar circumstances. Other nations have been driven together by fear and necessity—the governments have generally been the result of a single man’s observations; or the offspring of particular interests. In the formation of our constitution, the wisdom of all ages is collected—the legislators of antiquity are consulted—as well as the opinions and interests of the millions who are concerned. In short, it is an empire of reason.”

You can learn more about this empire of reason by exploring the records of the Constitutional Convention, available for free in the ConSource digital library.

September 11-14, 1786: Twelve delegates from 5 states, meeting at Annapolis, call for a larger convention the following year.

February 21, 1787: Congress endorses the Annapolis Convention’s call for a convention, slated to meet in Philadelphia on May 14.

May 14: Delegates from only Pennsylvania and Virginia are present in Philadelphia. This did not constitute a quorum according the standards of the Continental Congress.

May 25: With 29 delegates from 9 states present, the Convention begins. George Washington is chosen to preside.

May 30: Delegates start debating the Virginia Plan. The Delaware delegation threatens “to retire from the Convention” if all states do not have an equal vote in Congress. Convention resolves: “A national government ought to be established consisting of a supreme legislative, executive & judiciary.”

June 2: Convention stipulates that the executive “be chosen by the national legislature for the term of seven years.” This is rescinded on July 19 but reaffirmed on July 26.

June 4: Convention decides on a single executive, 7 states to 3.

June 15: William Paterson introduces the New Jersey Plan, which proposes only to amend the Articles of Confederation and maintains Congress as a unicameral body, each state having one vote.

June 18: Hamilton proposes that the chief executive and senators serve for life, with the executive having absolute veto power over all legislation. He receives no support.

June 19: Virginia Plan, as amended, defeats New Jersey Plan, 7-3 with one divided.
July 12: Convention finalizes the compromise on representation in the House: each slave counts as three-fifths of a person. Vote: 6-2-2.

July 23: Convention resolves to send its proposed plan to Congress, with a recommendation that it be sent to “assemblies chosen by the people” in each state for ratification. Vote: 9-1.

July 24: Convention appoints a five-member committee “to report a Constitution conformable to the Resolutions passed by the Convention.” (Committee of Detail.)

August 6: Committee of Detail submits its report, which enumerates the powers of each branch. Debate on this draft commences.

August 21, 22, 23, and 24: Convention debates whether Congress can prohibit the importation of slaves.

August 24: Popular election of the president is defeated a final time. Vote: 9-2.

August 30: Convention decides that ratification by nine states will suffice to place the Constitution into effect. Vote: 8-3.

August 31: Convention appoints an eleven-member committee (one from each state delegation) to consider “such parts of the Constitution as have been postponed, and such parts of Reports as have not been acted on.” (Committee on Remaining Matters.)

September 4: Committee of Remaining Matters issues its report, reversing key provisions that had already been decided: special electors, not Congress choose the president; the president, not the Senate, has treaty-making and appointive powers; a newly created vice- president presides over the Senate.

September 8: Convention approves the Committee of Remaining Matters report with only minor revisions. Convention appoints a five-member committee “to revise the stile of and arrange the articles which had been agreed to by the House.” (Committee of Style.)

September 12: Committee of Style submits its almost-final draft of the Constitution. George Mason and Elbridge Gerry propose “a Committee to prepare a Bill of Rights.” The motion fails, 0-10.

September 15: The Convention approves the Constitution, with all states present voting in favor.

September 17: 39 of the 42 members present sign the Constitution. Congress sends it to Congress.

September 28: Congress sends the Constitution to the state legislatures with instructions to call conventions to consider ratification, as stipulated by the Federal Convention.