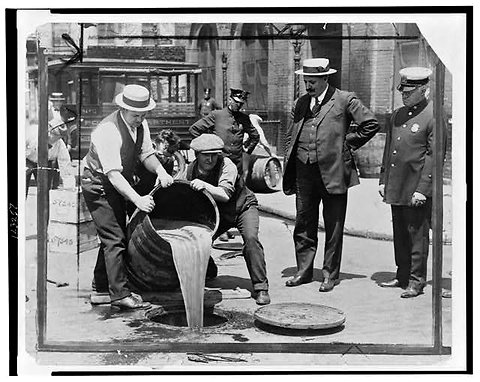 On December 5, 1933, national prohibition came to an end, when Utah became the 36th state to ratify the 21st Amendment to the U.S. Constitution. The 21st Amendment repealed the 18th Amendment, which went into effect nearly 14 years earlier.

After one year from the ratification of this article the manufacture, sale, or transportation of intoxicating liquors within, the importation thereof into, or the exportation thereof from the United States and all territory subject to the jurisdiction thereof for beverage purposes is hereby prohibited.

The Congress and the several States shall have concurrent power to enforce this article by appropriate legislation.

This article shall be inoperative unless it shall have been ratified as an amendment to the Constitution by the legislatures of the several States, as provided in the Constitution, within seven years from the date of the submission hereof to the States by the Congress.

The 18th Amendment was adopted after a concerted campaign by the national temperance movement. The proponents of the national temperance movement believed that alcohol led to reckless and destructive behavior, and that prohibition would lead to reductions in crime – especially issues related to domestic violence – and would improve the health and welfare of all Americans.

the average American over 15 years old consumed nearly seven gallons of pure alcohol a year – three times as much as we drink today – and alcohol abuse (primarily by men) was wreaking havoc on the lives of many, particularly in an age when women had few legal rights and were utterly dependent on their husbands for sustenance and support.

While prohibition did dramatically reduce alcohol consumption and alcohol-related deaths, it also gave rise to a large black market for alcohol and strengthened organized crime.

You can explore a Prohibition timeline provided by PBS here.

The eighteenth article of amendment to the Constitution of the United States is hereby repealed.

The transportation or importation into any State, Territory, or Possession of the United States for delivery or use therein of intoxicating liquors, in violation of the laws thereof, is hereby prohibited.

This article shall be inoperative unless it shall have been ratified as an amendment to the Constitution by conventions in the several States, as provided in the Constitution, within seven years from the date of the submission hereof to the States by the Congress.

A federal law provides federal funds to states that prohibit the sale of alcohol to minors under the age of 21. As a result, all 50 states have set their minimum drinking age at 21. The rules regarding sale and importation of alcohol varies widely between states.