On November 27, 1790, George and Martha Washington arrive in Philadelphia, the temporary capital of the United States.

Robert Morris, who helped finance the American Revolution, and signed the Declaration of Independence, Articles of Confederation and U.S. Constitution, volunteered his house to serve as Washington’s residence. Washington and his family occupied the house from November 1790 to March 1797. During their time in the home, Washington makes several enlargements to the home, including the addition of a slave quarters for the 9 slaves he brought with him from Mount Vernon.

After John Adams succeeds Washington as President, he and his family move into the President’s House in March 1797 and stay there until 1800 when they move to the newly completed White House in Washington, D.C.

Sadly, this historic home, where many important events in our nation’s early history occurred, was demolished.

The Independence Hall Association, a key player in the movement to commemorate the President’s House in Philadelphia, describes how the open-air historic site came into being –

The site of the President’s House lies directly across Market Street from the entrance to the Independence Visitor Center. A public bathroom was built on the site in 1954, and stood squarely atop the footprint of the main house until its removal on May 27, 2003. In 2002-03 the Liberty Bell Center was built, partially covering the footprint of the house’s backbuildings. Under the LBC’s porch, 5 feet from the main entrance, is the site of the quarters for the stable workers, two or three of whom were enslaved.

When this was revealed in the press in March 2002, it caused a public uproar. The Pennsylania State Legislature and the Philadelphia City Council called on the National Park Service to commemorate the house and its residents, especially the enslaved African Americans. In July 2002, the U.S. House of Representatives approved an amendment to the 2003 Department of Interior budget requiring the NPS to do the same. In January 2003, preliminary designs were unveiled for a $4.5 million commemoration of the house and its residents. Although it commemorated the enslaved Africans and went a long way in interpreting Black History, the design’s marking of the house’s footprint did not include the slave quarters, and was rejected by Philadelphia’s African American community.

At the Liberty Bell Center’s opening in October 2003, Philadelphia’s Mayor John F. Street pledged $1.5 million toward making the President’s House commemoration happen. In 2005, Congressmen Chaka Fattah and Robert Brady secured $3.6 million in federal funds for the project, and a design competition was begun. Kelly-Maiello Inc. of Philadelphia won the competition in February 2007. The following month, an archaeological dig was begun on a section of the property. Foundations of the main house, the kitchen ell, an underground passage connecting the two, and Washington’s bow window were uncovered. Kelly-Maiello unveiled revised designs, incorporating the archaeology, in December 2007, and the city increased its contribution to $3.5 million. A new $10.5 million budget was announced — $8.5 million for construction, $2 million as an endowment — and Mayor Michael Nutter’s administration held a September 2008 fund-raiser. In February 2009, Delaware River Port Authority approved a $3.5 million contribution. Construction of the commemoration began in August 2009.

Today, on Independence Mall in Philadelphia, you can view an open-air historic site, located near the Liberty Bell Center, that through Porcelite panels and illustrated glass provide a brief history of the site, timelines and dramatic video vignettes. The site also explores the paradox of freedom and slavery in the nation’s first executive mansion. 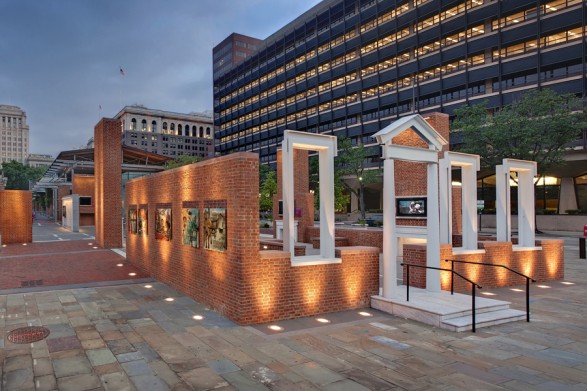