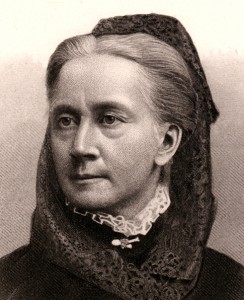 This week the Supreme Court opened its October Term 2016. As I reflect on this Court, with three sitting woman justices, I was reminded of the extraordinary efforts of Belva Ann Lockwood to open the Court to women. It is those efforts I’d like to spotlight here. Lockwood, a true Supreme Court trailblazer, who successfully lobbied Congress to pass legislation opening the U.S. Supreme Court bar to qualified women lawyers. She became the first woman to argue before the U.S. Supreme Court, and would go on to twice run for president as a candidate for the Equal Rights Party.

Lockwood’s Difficult Pathway to the Bar

Lockwood applied to the Columbian Law School in Washington, DC, in 1870. The school’s trustees denied her admission, citing their belief that she would prove a distraction to the male students. She was later accepted to the new National University Law School (now part of the George Washington University). While she completed her legal studies in 1873, the school was unwilling to grant her a diploma on the basis of her gender. Without a diploma, Lockwood was unable to gain admittance to the bar.

In September 1873, Lockwood wrote a letter to President Ulysses S. Grant, who also served as president of National University, appealing to him to intervene on her behalf. She explained that she had passed all her courses and deserved to be awarded a diploma. A week after sending the letter, Lockwood received her diploma. She was 43.

After her admission to the District of Columbia bar, Lockwood became one of the first female lawyers in the United States. She started with a modest legal practice, but then began to build a reputation as a competent lawyer – one who even gained respect from her male colleagues.

In 1876, she sought to gain admission to the U.S. Supreme Court Bar. The justices refused to admit her saying “none but men are permitted to practice before [us] as attorneys and counselors.” Lockwood, never one to accept the status quo, drafted a bill that would require women to have the same access as male lawyers to the Supreme Court Bar. She vigorously lobbied Congress from 1874 to 1879. In 1879, Congress passed the legislation and President Rutherford B. Hayes signed it into law. The law required that all qualified women lawyers be admitted to practice before the U.S. Supreme Court.

Interestingly, women were able to practice before the U.S. Supreme Court 41 years before they were allowed to vote after the ratification of the 19th Amendment.