This is the first veto override of President Obama’s two terms in office, and is a good time to review Congress’s power to override presidential vetoes under the United States Constitution. Per the terms of the Constitution, President’s veto can be overridden by two-thirds of both houses of Congress. The super-majority requirement makes veto overrides relatively rare. A Congressional Research Service Report found that prior to 1969, Congress overrode approximately 1 of every 18 (5.7%) regular vetoes. Since 1969, Congress has voted to override about 1 out of 5 (18.3%) regular vetoes.

This useful chart from the same CRS report shows the number of vetoes overridden from 1789 through the presidency of George W. Bush (note that the report was published in April 2004, and does not reflect that Congress voted to override 4 of President Bush’s vetoes prior to the end of his second term). 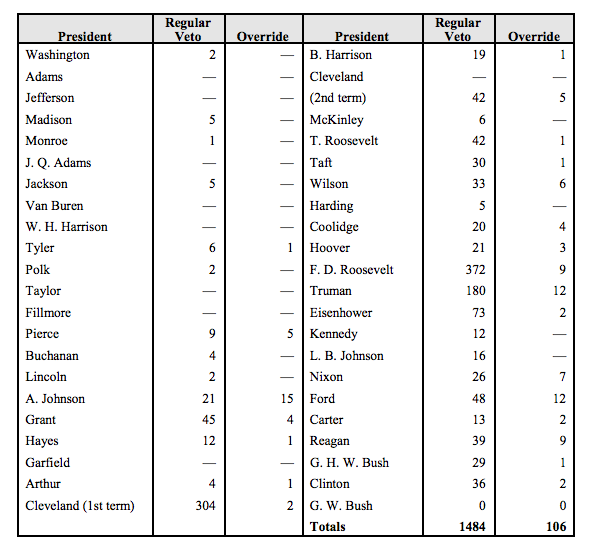 Article I, § 7 of the United States Constitution reads in relevant part –

Every Bill which shall have passed the House of Representatives and the Senate, shall, before it become a Law, be presented to the President of the United States; If he approve he shall sign it, but if not he shall return it, with his Objections to that House in which it shall have originated, who shall enter the Objections at large on their Journal, and proceed to reconsider it. If after such Reconsideration two thirds of that House shall agree to pass the Bill, it shall be sent, together with the Objections, to the other House, by which it shall likewise be reconsidered, and if approved by two thirds of that House, it shall become a Law. But in all such Cases the Votes of both Houses shall be determined by yeas and Nays, and the Names of the Persons voting for and against the Bill shall be entered on the Journal of each House respectively. If any Bill shall not be returned by the President within ten Days (Sunday excepted) after it shall have been presented to him, the Same shall be a Law, in like Manner as if he had signed it, unless the Congress by their Adjournment prevent its Return, in which Case it shall not be a Law. (emphasis added)

Every Order, Resolution, or Vote to which the Concurrence of the Senate and House of Representatives may be necessary (except on a question of Adjournment) shall be presented to the President of the United States; and before the Same shall take Effect, shall be approved by him, or being disapproved by him, shall be repassed by two thirds of the Senate and House of Representatives, according to the Rules and Limitations prescribed in the Case of a Bill. (emphasis added).

In Federalist No. 69, Alexander Hamilton discussed the power of Congress to override presidential vetoes –

The President of the United States is to have power to return a bill, which shall have passed the two branches of the Legislature, for re-consideration; but the bill so returned is to become a law, if upon that re-consideration it be approved by two thirds of both houses. The King of Great Britain, on his part, has an absolute negative upon the acts of the two houses of parliament. The disuse of that power for a considerable time past, does not affect the reality of its existence; and is to be ascribed wholly to the crown’s having found the means of substituting influence to authority, or the art of gaining a majority in one or the other of the two houses, to the necessity of exerting a prerogative which could seldom be exerted without hazarding some degree of national agitation. The qualified negative of the President differs widely from this absolute negative of the British sovereign; and tallies exactly with the revisionary authority of the Council of revision of this State, of which the Governor is a constituent part. In this respect, the power of the President would exceed that of the Governor of New-York; because the former would possess singly what the latter shares with the Chancellor and Judges: But it would be precisely the same with that of the Governor of Massachusetts, whose constitution, as to this article, seems to have been the original from which the Convention have copied.

And in Federalist No. 72, Hamilton went on to say

But the Convention have pursued a mean in this business; which will both facilitate the exercise of the power vested in this respect in the executive magistrate, and make its efficacy to depend on the sense of a considerable part of the legislative body. Instead of an absolute negative, it is proposed to give the executive the qualified negative already described. This is a power, which would be much more readily exercised than the other. A man who might be afraid to defeat a law by his single veto, might not scruple to return it for re-consideration; subject to being finally rejected only in the event of more than one third of each house concurring in the sufficiency of his objections. He would be encouraged by the reflection, that if his opposition should prevail, it would embark in it a very respectable proportion of the legislative body, whose influence would be united with his in supporting the propriety of his conduct, in the public opinion. A direct and categorical negative has something in the appearance of it more harsh, and more apt to irritate, than the mere suggestion of argumentative objections to be approved or disapproved, by those to whom they are addressed. In proportion as it would be less apt to offend, it would be more apt to be exercised; and for this very reason it may in practice be found more effectual. It is to be hoped that it will not often happen, that improper views will govern so large a proportion as two-thirds of both branches of the Legislature at the same time; and this too in defiance of the counterpoising weight of the executive. It is at any rate far less probable, that this should be the case, than that such views should taint the resolutions and conduct of a bare majority. A power of this nature, in the executive, will often have a silent and unperceived though forcible operation. When men engaged in unjustifiable pursuits are aware, that obstructions may come from a quarter which they cannot controul, they will often be restrained, by the bare apprehension of opposition, from doing what they would with eagerness rush into, if no such external impediments were to be feared.

The other point of inquiry is, as to the extent of the legislative check upon the negative of the executive. It has been seen, that it was originally proposed, that a concurrence of two thirds of each house should be required; that this was subsequently altered to three fourths; and was finally brought back again to the original number. One reason against the three fourths seems to have been, that it would afford little security for any effectual exercise of the power. The larger the number required to overrule the executive negative, the more easy it would be for him to exert a silent and secret influence to detach the requisite number in order to carry his object. Another reason was, that even, supposing no such influence to be exerted, still, in a great variety of cases of a political nature, and especially such, as touched local or sectional interests, the pride or the power of states, it would be easy to defeat the most salutary measures, if a combination of a few states could produce such a result. And the executive himself might, from his local attachments or sectional feelings, partake of this common bias. In addition to this, the departure from the general rule, of the right of a majority to govern, ought not to be allowed but upon the most urgent occasions; and an expression of opinion by two thirds of both houses in favour of a measure certainly afforded all the just securities, which any wise, or prudent people ought to demand in the ordinary course of legislation; for all laws thus passed might, at any time, be repealed at the mere will of the majority. It was also no small recommendation of the lesser number, that it offered fewer inducements to improper combinations, either of the great states, or the small states, to accomplish particular objects. There could be but one of two rules adopted in all governments, either, that the majority should govern, or the minority should govern. The president might be chosen by a bare majority of electoral votes, and this majority might be by the combination of a few large states, and by a minority of the whole people. Under such circumstances, if a vote of three fourths were required to pass a law, the voice of two thirds of the states and two thirds of the people might be permanently disregarded during a whole administration. The case put may seem strong; but it is not stronger, than the supposition, that two thirds of both houses would be found ready to betray the solid interests of their constituents by the passage of injurious or unconstitutional laws. The provision, therefore, as it stands, affords all reasonable security; and pressed farther, it would endanger the very objects, for which it is introduced into the constitution.

The first congressional override of a presidential veto occurred on March 3, 1845, when the 28th Congress voted to override President John Tyler’s veto of an appropriations bill.

Congressional action on a vetoed measure begins when the President returns the bill to the chamber of origin along with his objections in the form of a veto message. Once the vetoed legislation has been received by the originating chamber, that house is constitutionally required to “reconsider” the vetoed bill. The Constitution is silent, however, on the meaning of “reconsideration.” Procedure and tradition govern the treatment of vetoed bills returned by the President. On receipt of the vetoed bill, the President’s message is read into the journal of the receiving house. After entering the message into the journal, the House of Representatives or the Senate complies with the constitutional requirement to “reconsider” by laying the measure on the table (essentially stopping further action on it), referring the bill to committee, postponing consideration to a certain day, or immediately voting on reconsideration (vote on override). Action by both the House and the Senate is required to override.5 A two-thirds majority vote by Members present (provided there is a quorum) is required to override a presidential veto. When one house fails to override, the other house will not attempt to override, even if the votes are present to succeed. Action by the Senate or the House of Representatives on a veto may be taken at any time during a Congress in which the veto is received.